Rituals of Blood - In the Ancient Americas

In North America, Aztec (Mexica) society regarded death as a 'spectacle of life'. Death was visual and commonly displayed for the public to see. Aztec blood rituals were considered part of a reciprocal relationship between humankind and god. The Aztec approach was that the ultimate gift to the gods could only be blood and the gift of blood was among the highest honour one could pay to the gods. In effect, Aztec blood rituals were an act of reciprocity for the blood the gods sacrificed of themselves in order to create the sun and the cosmos. 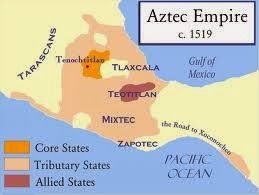 Aztec blood sacrifices ensured the gods would remain helpful and they also ensured that the sun would continue to shine, the fields would grow abundant crops and the wheels of life would continue to turn. The Aztecs had a fatalistic view of the world and the Aztec lifestyle was governed by the need to supply fresh-blooded sacrificial victims to the sun god who required the hearts of men to give life to the world and assist the souls of dead warriors to Aztec heaven. If blood was not sacrificed to the gods, the humans believed they would be punished and endure excessive pain 'more violent than any man could ever endure'.

Within ancient Mesoamerican societies, and especially for the Maya, bloodletting was also ritualized, a self-cutting or piercing of an individual's body that served both ideological and cultural functions.        Bloodletting, when performed by ruling elites, was crucial to the maintenance of sociocultural and political structure. This spilling of blood was used as a tool to legitimize the ruling lineage's socio-political position and, when enacted, was important to the perceived well-being of a given society or settlement.
Within their belief system, human blood was partially made up of the blood of the gods, who sacrificed their own divine blood in creating life in humans. Thus, in order to continually maintain the order of their universe, the Maya believed that blood had to be given back to the gods. 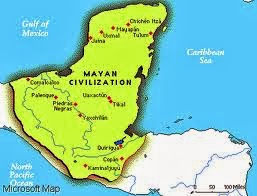 Bloodletting permeated Maya life. Mayan kings performed the act at every major political event - dedication of buildings, burials,marriages, and births all were 'celebrated' with bloodletting.
Bloodletting in Maya culture was also a means to a vision quest, where fasting, loss of blood, and possibly hallucinogenics lead to visions of ancestors or gods.
The Maya created a ritual that used bloodletting, fasting, and smoking of tobacco as a means to induce hallucinations, allowing them to commune with their gods and ancestors.
The ancient Mayan smoke serpent ritual would begin with a few days of fasting. Then the participants would prepare a fire in a ceremonial pot. Then they would light the ceremonial pipe and take a few puffs of tobacco. Then the bloodletting would begin. The participants would pierce various parts of their body (some of the most common were the tongue and an important part of the male anatomy) using obsidian blades, sting ray spines or ceremonial jade blades.
They would allow the blood to soak into ceremonial papers, which they would then burn as an offering to the gods. This would raise a pillar of smoke through which the vision serpent could appear. If they were successful, they would envision a serpent, which would open its mouth, and through the serpent, the gods and ancestors would speak to them.

All these rituals were spectacles, carried out on the summits of pyramids or on elevated platforms that were usually associated with broad and open plazas or courtyards (where the masses could congregate and view the bloodletting).

These publicly self-inflicted wounds were usually carried out by a ruling male but prominent females are also known to have performed the act. The El Perú tomb of a female (the 'Queen's Tomb') contains many grave goods but most importantly, a ceremonial stingray spine associated with her genital region.
One of the best-known lintels from Mesoamerica, shows Lady Xoc drawing a barbed rope through her tongue.


There is no representation of actual bloodletting in Olmec art but evidence for its practice does exist in the jade and ceramic replicas of stingray spines and shark teeth as well as representations of such paraphernalia on monuments and stelae and in iconography.


A translation of the Epi-Olmec culture's La Mojarra Stela 1 (155 CE) tells of the ruler's ritual bloodletting by piercing his penis and his buttocks, as well as the ritual sacrifice of the ruler's brother-in-law.

Along the northwestern coastal areas of Peru, the Moche culture flourished between 100–800 CE. Human sacrifice was a significant part of their state religion, aimed at the appeasement of the deity named Ai Apaec. Ai Apaec is depicted in Moche art as fanged, half-human, most often in the shape of a spider, holding in one hand a severed human head and in another the crescent-shaped ceremonial knife called a tumi. In the archeological literature, this deity has come to be called the Decapitator.

At the archeological site called Huaca de la Luna (Pyramid of the Moon), still used by local shamans who refer to the site as El Brujo (the Sorceror), archeologists have found the remains of more than forty men, ranging in age from fifteen to thirty years old. The bones are scattered, the bodies thrown over the edge of a rocky outcrop, embedded in layers of sediment.
The bodies all have the markings of human sacrifice - cut marks on their neck vertebrae indicating their throats had been slit; several bodies had been decapitated and their jaws removed.
Some of the skeletons were splayed, as if they had been tied to stakes. Many victims had their femurs forcibly torn from their pelvic sockets. Many victims had multiple healed fractures to ribs, shoulder blades, and arms, suggesting regular participation in combat.
Were these men the losers in ritual combat among elite Moche warriors or prisoners of war captured in territorial combat with other societies?
Sacrifices are frequently depicted in Moche art, on ceramics and on the walls of the pyramid sites themselves. The sacrifice is portrayed as an elaborate blood-letting ritual in which naked bound victims — often shown, surprisingly, with erect penises — have their throats cut with atumi, and the spurting blood caught in gold goblets to be drunk by high priests.
Often depicted in these sacrificial scenes is a sort of seed pod floating in the air over flying priests or bound victims marching off to be sacrificed —a grooved, comma-shaped fruit with an enlarged calyx. Because of its shape, archeologists have generally called the plant ulluchu, a Quechua term meaning penis pepper.

It has been suggested that a concentrated dosage of ulluchu seeds, if ingested, would increase heart rate, elevate blood pressure, and widen blood vessels, making make it easier to extract sacrificial blood...and cause penile erections.
Some believe that a ground preparation of these seeds, when inhaled, may have been used as a hallucinogen. A ceramic figurine shows a seated male with ulluchu plants on his headdress holding a gourd and pestle, possibly containing ground ulluchu seeds, with his nostrils flared, as is often seen in people inhaling hallucinogenic snuffs.

Drugs have been used in religious rituals both in the 'Old World' and the 'New World'(see posts: Drugs Used in Religion-The 'Old World'; Drugs Used in Religion-The 'New World'). In the art of the Moches, there is a painting showing a winged runner or flying priest with ulluchu seeds floating above his head, and an instrument in his hand that closely resembles a typical double snuff tube of the sort used to inhale powdered hallucinogens. When inhaled by priests, some components could have a psychoactive effect, which would not necessarily lead to high levels of toxicity, and could induce very rapid, short-term hallucinations.

In North America, before the arrival of Europeans, ceremonial body piercing (with blood letting) was practiced as part of the sun dance, a religious ceremony carried out by a number of Native American and First Nations Peoples, primarily those of the Plains Nations. Even today, each tribe has its own distinct practices and ceremonial protocols. Many of the ceremonies have features in common, including dances and songs passed down through many generations, the use of a traditional drum, praying with the pipe, offerings, fasting, and in some cases the ceremonial piercing of skin.
Although not all sun dance ceremonies include dancers being ritually pierced, the object of the sun dance is to offer personal sacrifice as a prayer for the benefit of one's family and community.

*Blood Rituals: subject of research for the novel  The Tao of the Thirteenth God - Amazon Kindle.