'Tao', a word taken from the Chinese character means doctrine, path or way. It implies enlightenment, spiritual perfection. The 'Tao' is a natural force that makes the universe the way it is.

The religion of 'Taoism', attributed to Lao tzu, began as a philosophy and with time, evolved into a religion with multiple deities.

Today, the term 'tao', is still used in reference to religion, has been used in discussion of science (The Tao of Physics-Fritjof Capra) and sometimes has taken on a colloquial meaning of simply 'the way' things are done.
Within the Mayan belief system, the Long Count calendar was composed of 13 baktuns or 'heavens', the years adding up to a total of 5,125 in one grand cycle. December 20-22, 2012 brings the 13th cycle to a close (see post: The Mayan Calendar and the Long Count).

The number 13 seems to have special significance in many cultures (see post: Fun with Numbers).

In Christianity, Jesus was followed by 12 disciples, making 13 men; a witch's coven is composed of 13 members; King Arthur had 12 Knights of the Round Table, a total of 13 men; a lunar year is 13 months long; the Celtic year was ruled by 13 sacred trees; there are 12 constellations of the zodiac 'surrounding' the earth (that makes 13) and, in the Mayan culture, the 5,125 year cycle consists of 13 baktuns, each of 144,000 days.

The last god in this Mayan pantheon, the one who rules the 13th Heaven (the baktun that we are currently in) is the Dual Creator God, the invisible god.

Email ThisBlogThis!Share to TwitterShare to FacebookShare to Pinterest
Labels: Religion

The Tao of the Thirteenth God

At what hellish auction
Can I sell my soul?
To what devil dealer
Will the hammer fall?

“Amadeus.” The limp body turned over onto its side and retched into the bowl on the floor. Spittle dripped from the corner of his mouth and he tried to wipe the moisture off the note pad he had placed at his side. The man opened his eyes then quickly shut them tight. “That’s all…That’s my name, the name she knows. Please! Please don’t ask me anymore.” The man could sense the question but could hear no voice. He turned back and buried his face in his hands.
The clang of a street car bell echoed from a distance then the whole room shook as the machine lumbered past the small house. For a brief moment, a headlight filled the dark, empty space - empty, except for the man on the sofa and two wide bowls – one for the vomit, the other half-filled with a murky, brown liquid. His last gasps had filled the larger vessel and the acidy contents had breached the rim, spilling over onto the wool carpet.

Amadeus opened his eyes and spoke to his teacher, a gray shadow, a vague silhouette in the darkness. “No…I can’t drink anymore. No more… Just…Just let me see her again. One last time, please…Just once more.”
A bare-chested, muscular African stood up and shook his head, his dark eyes wide, angry. In one hand he held a sheaf of grass, in the other, the twisted root of a small tree.
Another car rumbled past and its headlamp lit up the room again, revealing its stark, barren emptiness.
But the man on the sofa could see him. In the dark, he could see the muscles of his shoulders, smooth, sinewy, rippled. The African stepped forwards and shook both fists.
Amadeus nodded, reached down and, with trembling hands, lifted the smaller bowl to his lips. He sipped on the acrid fluid then gagged.
The shaman’s eyes became narrow slits and his jaw clenched.
The man on the sofa sat upright and nodded again. He looked past the dark figure, took a deep breath and poured the rest of the liquid down his throat.
Amadeus felt the trickle pass his tongue then slide into his chest. At first, there was a flush, rising from his shoulders, up the sides of his neck and over his face, two warm hands gently caressing his cheeks. But with each swallow and with the bowl finally empty, the ache in his stomach grew, each sip of poison adding, drop by drop to the visions he knew he was about to see.
The view grew foggy, the image of the tall black man cast behind a pane of translucent glass. Amadeus fumbled between the pillows then closed his eyes and, blinded to his world, positioned his glasses across his nose. And with his eyes closed he could see. He could see, far in the distance a man, a priest, white robes flowing in the breeze, railing at the crush of people - his flock - that sat, silent in the grass at his feet.
Amadeus scanned the crowd, his eyes shut tight, not wanting to miss one moment, one small clue that would show him where she was. He knew that she had to be there, one small face in the crowd of a thousand – one innocent little girl entranced by the preacher, their messiah, their god.
He shuddered, opened his eyes then stared straight ahead. The man, the priest had disappeared but the cloudy image was still there. He tried again but, eyes open or eyes closed, the hazy shadow of the African loomed over him. The walls, the floor, even the windows of the small house had transformed into stone. No light from the street, no clamor of the trolley. The two men, student and teacher, stared at each other, locked in the bowels of the deep earth.
Amadeus stood up and looked past the African. A crowd had gathered - noiseless shadows lingering behind his black teacher, stepping forwards then back, always present but never fully real, something…Someone he could feel but could not touch.
The parade of shadows continued for what seemed to him hours, perhaps days and, all the while, he could sense his name being called - a soft serenade, a sweet collection of numbers…Like a song, chanting out his name.
“Sophia! Sophia!” Amadeus jumped to his feet and pushed the African to the side. His arms passed through the tall man like a warm breath through a cold, dense fog.
The shadows behind the man vibrated, shifted then spoke without saying a word. “Amadeus. I’m here. I’m here for you, Amadeus.”
Amadeus stared into the mist. The shadows had lifted. The teacher was gone. A lone figure stood before him, her head bowed, fingers clasped at her waist, her long fair hair draped across her slight shoulders. 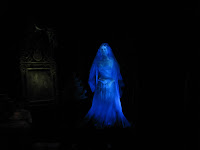 She looked up and, for the first time since she had died, he could see her, his one sister, his only sister. “Sophia…I have one…One last chance.”
Sophia looked up, her deep, blue eyes hollow with sadness. She whispered soundless thoughts – thoughts only for her brother’s ears. “Westward…Westward, Amadeus…To the land-“
“Speak words to me! Let me hear your voice!” He stepped forwards then stopped as she held up her hand. “This time…This time I will stop him, Sophia! And he won’t ever…Ever do to anyone else…What he did to you!”
His sister nodded, the sadness still in her eyes, and she repeated the message. “Westward…Westward. To the land of the justice. I am-“
“Sophia!” The man rushed forwards and clutched at the image. He felt her soft touch, breathed in her gentle warmth then he hesitated and gagged. He could smell the distance, the death that separated the two of them. Amadeus groaned. His arms fell through dust and his sister disappeared into the blackness.
He stumbled then blindly grabbed at the note pad on the sofa and tried to wipe the vomit from the paper. Amadeus groaned again, felt the loss pierce his heart and collapsed to the ground. 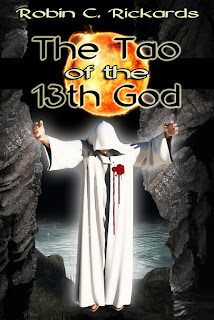 The Tao of the Thirteenth God - Amazon Kindle
Posted by Unknown No comments: