Runes or the runic alphabet is a writing system that originated in Germanic Europe, the earliest runes dating to about the year 100 AD. There were a number of variations of the script also called Futhark (Futhorc)-Elder, Younger and Anglo-Saxon being the three best known; the naming of the script, was a derivation of the first 6 letters of the script itself (Fehu, Uruz, Thuriasaz, Ansuz, Raidho, Kenaz) much as the our own (Latin or Roman) 'alphabet' is named after the first 2 corresponding letters of the Greek (alpha and beta). 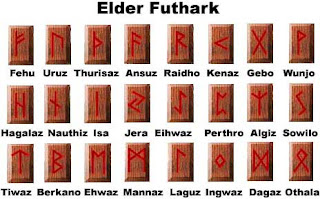 The use of this writing system became less common as Christianity infiltrated Europe, introducing the alphabet of the Christian Roman Empire. Runic 'symbolism' however continued and became a common 'device of divination'.
Runes were said to have been created by the Norse god, Odin and the use of these 'letters' was associated with the ability to bring the dead back to life (so many cultures seem to want  to do that!).

Odin declared:
'I know a twelfth one if I see, up in a tree, a dangling corpse in a noose, I can so carve and color the runes that the man walks and talks with me.'

For divination, 'Casting of the Runes' was generally a straight forward affair, gently throwing the letters (usually inscribed on stone) onto a flat surface and then examining their relative positions one to the other. Runic reading is usually meant to address a particular issue, examining the past, the present and 'what will be' if the person who casts the runes continues on that same path.

In World War II, the Nazis (many of whose members were obsessed with the 'occult') adopted a variation of the 'sig' or sun sign as the insignia of the infamous SS much as they had adopted the swastika (another sun symbol) from Indian culture (see post: Symbols of the Sun).


Each Rune can also have a meaning on its own such as 'Dagaz' for
enlightenment and 'Tiwaz' meaning struggle.


*Religious symbols: subject of research for the novel  The Tao of the Thirteenth God - Amazon Kindle.